Where our friends in Kerry have a scenic coastal drive called "The Ring of Kerry", we here have a 100 mile coastal route called the Inis Eoghain '100'. The spelling refers to the Gaelic for the area, "the island of Owen" for it was once an island, in fact a series of islands with a waterway stretching from near Carrigans on Lough Foyle to Blanket Nook on Lough Swilly in County Donegal.

Numerous brown signs can be seen along the road to keep you on its path, but a simple rule of thumb is to keep close to the coast. There are maps of the full route available from all good local shops and from Inishowen Tourism in Carndonagh, Buncrana Tourist office as well as signage at Greencastle pier, Burnfoot and Muff. Better still, the peninsula's first GPS Travel App of the area is available by clicking here.

The notional start of the Inis Eoghain '100' is in Bridgend on the border outside of Derry. The Idea is that you should start here and make your way clockwise around the peninsula via Buncrana, Ballyliffln, Malin Head, Culdaff, Greencastle, Moville, Muff and then back to Square One. Don't worry, that journey simply clocks up the 100 miles. Take it at your own pace at your own starting point of Greencastle, Muff or wherever and take it all in; there is no place quite like it elsewhere. Writing back in 1969, Seamus Heaney summarized the experience with an easy eloquence:

The Peninsula
When you have nothing more to say, just drive
For a day all around the peninsula,
The sky is tall as over a runway,
The land without marks, so you will not arrive
But pass through, though always skirting landfall.
At dusk, horizons drink down sea and hill,
The ploughed field swallows the whitewashed gable
And you're in the dark again. Now recall

The glazed foreshore and silhoutted log.
That rock where breakers shredded into rags,
The leggy birds stilted on their own legs,
Islands riding themselves out into the fog.
And then drive back home, still with nothing to say
Except that now you will uncode all landscapes
By this; things founded clean on their own shapes
Water and ground in their extremity.

The Boys at teampaddymurphy.ie did a film of the Inis Eoghain '100' in March 2012. They drove the whole 100 mile around Inishowen in a day. They started and finished at the most northerly point of Ireland, in Malin Head. They offer a tip for all drivers-to-be: Just drive as quickly as you can - The faster you go, the less pot holes you'll hit. During the film, you can hear different bagpipe songs from Neil Toland. Just see the film S01E03 ‐ Inis Eoghain '100' for yourself. 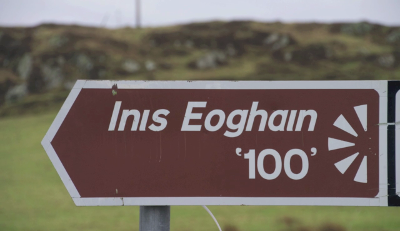 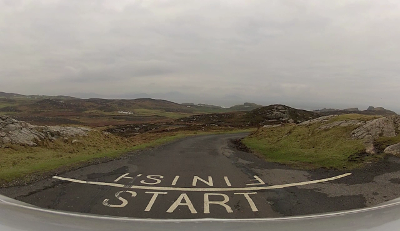 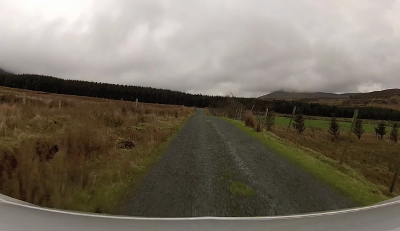 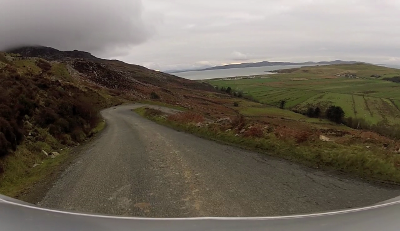 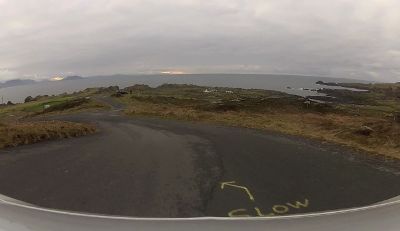